Character Jug of the Year 2001

Queen Victoria I reigned over Britain from 1837 until 1901 – the longest reign in British history at the time. 'The Grandmother of Europe' and namesake of the Victorian Era, birthed nine children and married them off across the continent earning her a wealth of contacts and securing her a (relatively) peaceful reign.

Limited edition of one thousand. This is number 428. 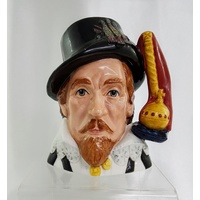